It’s goal post day on the blog. I know it’s hard to contain your excitement over that, but we’re going to have to find a way to keep calm and carry on.

First up, let’s see how I did with October’s goals (spoiler alert: not great…)

Yeah. I didn’t do this. I’m pretty much in the exact same spot I was in at the beginning of October. Can’t quite find the right hook for the start of Act III. I keep writing the same scene from different POVs to see if that’s the problem, and it keeps not feeling like the solution, so I think the plot itself isn’t right. Which sucks because I don’t have a Plan B. Or whatever letter this draft happens to be on now. Zeta, probably.

I did this. Technically, I read five books. Sure, they were, like, thirty-page-long graphic novels, but it still counts.

While I didn’t hit three miles every day, I still managed to walk nearly 122 miles, which averages out to almost four miles each day. That’s what we call good enough, kids.

I’m working on the Terrible Romance Sequel this month. As previously stated, I have a concept for this story and not much else, so I have no idea how this month will go. It’s Day Two, and I’m well ahead for the moment, but…yeah. I have a feeling I shall soon be running into a very large and high brick wall that will probably be surrounded by a moat filled with alligators and zombies and zombie alligators and things of that nature.

But I shall enjoy the creative flow while it lasts. I really hope I can make this story work because I’m really kind of loving it right now.

Which probably means I just jinxed things horribly. That, or me actually liking something I’m writing is the final sign of the apocalypse.

Also, for reasons unknown, I also decided to make things more interesting/frustrating by using Scrivener. I heard through the grapevine that I might decide I like it hate it less if I start a brand-new project with it rather than trying to transition in the middle of a current WIP.

We’ll see how it goes. Or for long that whole Scrivener thing lasts (it’s already made it to Day Two, which is about two days longer than I thought it would last…). But the ultimate goal here, of course, is to hit that 50k mark.

If you’re also participating in NaNoWriMo and are looking for some buddies, feel free to add me. My user name is M.J. Fifield (clever, right?).

It is always good to avoid becoming part of one’s couch. Or so I’m told. Fortunately, the fur babies make this goal pretty easy. They like to walk. A lot. So we walk. A lot.

And on that note, I’m outta here. I’ll try to do better the next time.

Stay safe and well, everyone. 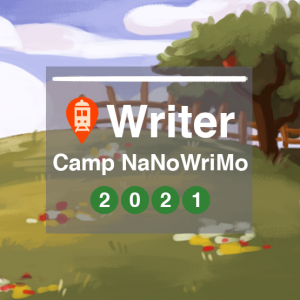